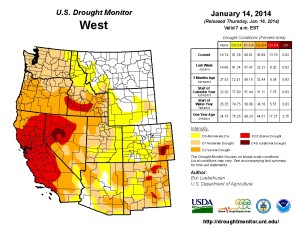 As most of us in Reno already know – it is an extremely dry winter.  What does this mean for the Truckee River, Lake Tahoe and Pyramid Lake?  Likely, without a significant change in the overall precipitation pattern, Lake Tahoe will fall below its rim at 6,223 feet and no more water will flow to the Truckee from Tahoe.  That means that all the water in the Truckee River will have to come from other tributaries – mostly from releases from reservoirs.  The Federal Water Master, Chad Blanchard, told a TV news station, “We are basically out of water in those reservoirs at this time or very close to it.  [The Truckee River flows] will be an absolute trickle but it will be much lower than people are used to.” 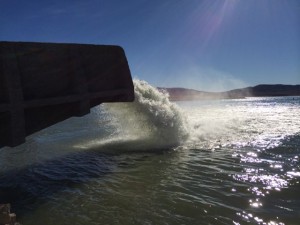 Water from the Truckee River, diverted into the Truckee Canal at Derby Dam, ends in Lahontan Reservoir on the Carson River.  (D. Ghiglieri, January 2014)

Our use of water from all sources, including the Truckee River, depletes water for natural systems. Human uses take significant amounts of water directly from streams and the river leaving smaller amounts for Lakes and in-stream flows.  Effectively, even in an average year, natural systems slide into drought conditions.  In a drought, natural systems can simply disappear and the wildlife they would otherwise support disappear, too.  We have made strides to keep some in-stream flows during droughts through the “Water Quality Agreement” that Reno and Sparks entered into in the 1990’s.  That offers all of us a little hope that the Truckee won’t be dry this year.  If 2015 is dry too, all bets are off.