The forecast for the first week in February calls for daily high temperatures hovering close to the 60ºF mark and no snow or rain in Reno-Sparks. As winter ticks away, the chances of recovering the Tahoe-Truckee mountain snowpack to average by April 1 dim.

Most higher elevation NRCS (National Resource Conservation Service) stations in the Tahoe and Truckee basins are reporting between 25 and 50 percent of average for the period of record (POR). The strongest storms that produce winter precipitation in the form of snow and rain typically occur December through March. Because of the dry December and well below average January precipitation, the Tahoe and Truckee River basins would need to have more than average snow and rain for February and March to end up with an average snowpack by April 1. The long-range forecast for February, however, calls for continuing dry conditions. As far back as early December, the National Weather Service had forecast that this winter would be warmer and drier than the average. Unfortunately, that forecast has been right-on. We can always hope for a turnaround. 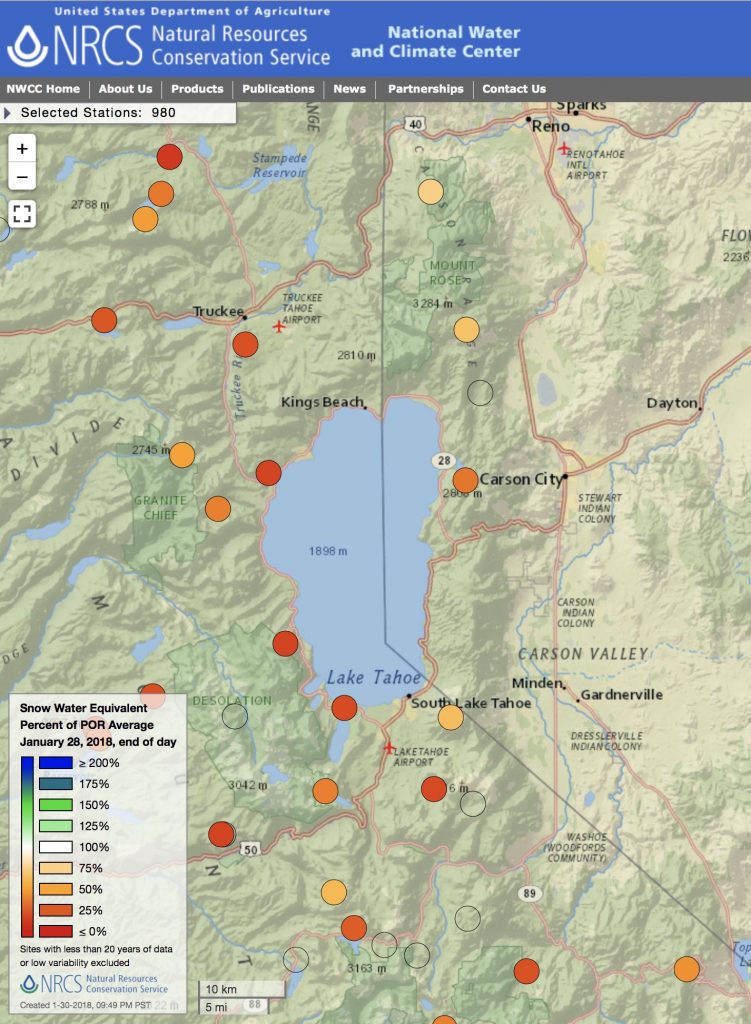 Unfortunately, too many people build shelters up and down the Truckee River Bike way and walking path. The Truckee River and bike way are a major amenity for residents and visitors alike – at least they should be.

Today, after a brief walk along the Truckee, I saw at least a dozen people occupying some 8 (or more) makeshift camps on the north bank between Greg Street and a hundred yards beyond Rock Park in Sparks. The camps and, indeed, the path itself are littered with debris, grocery carts with food or clothing, smoldering camp fires, tents, tarps, handmade shelters, and stashes of bags. 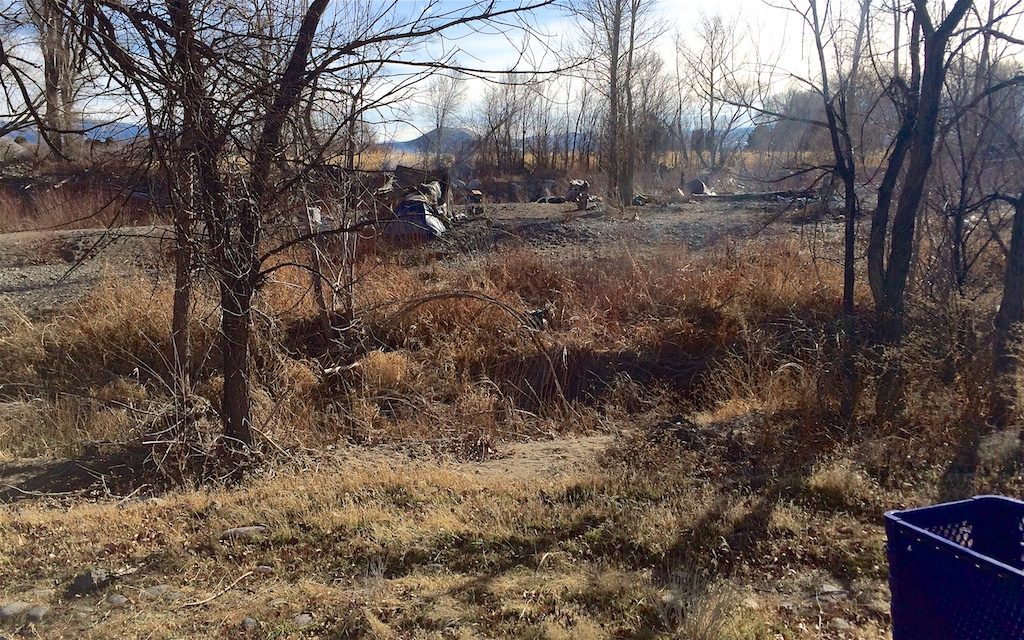 The river path is fast changing from a scenic river corridor offering rejuvenation and recreation to an unhealthy slum. Why? Although, this part of the bike way is in Sparks, the encampments are also widely present in Reno, too.

How can the cities of Reno and Sparks solve the problem to have safe places for camps away from the river? Bathroom facilities are not available to the homeless or are far from the encampments. Too often that means the river itself becomes the default repository. Camps produce all manner of waste because of their permanent occupancy. Why are these unhealthy encampments allowed along the river? The need to provide secure and clean places for homeless people is long overdue.

Over the years, encampments, trash, graffiti, discarded carts, and makeshift camps are increasing and expanding in size. Seemingly permanent encampment residents lay claim to the river with large, occupied spaces. Many places along the river bike path appear unsafe to reach the river itself because camps are occupied by people guarding their possessions.

City and county government need to take action to move these encampments to protect the river from pollution and return the bike path to beauty and safety for everyone to enjoy. 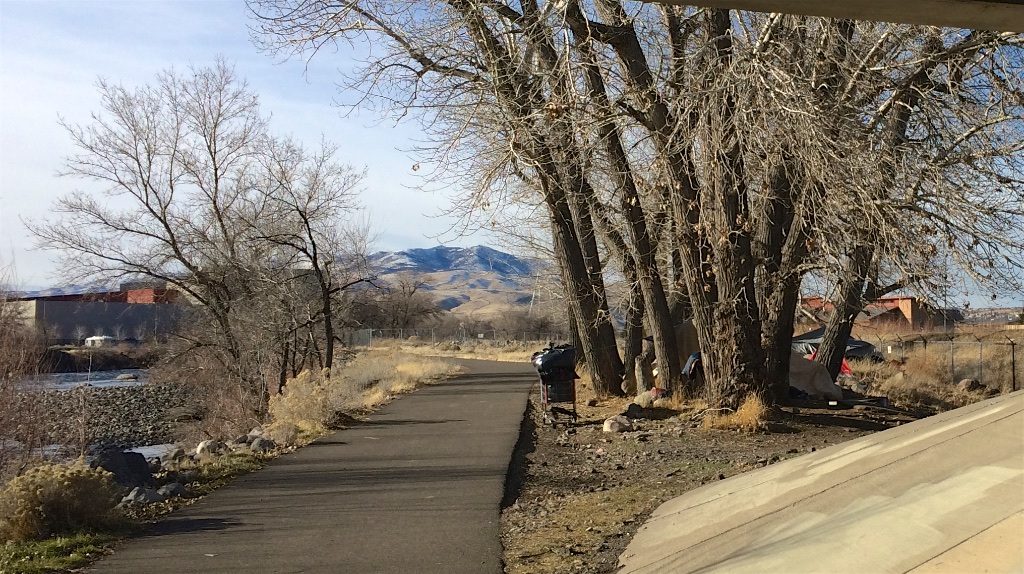 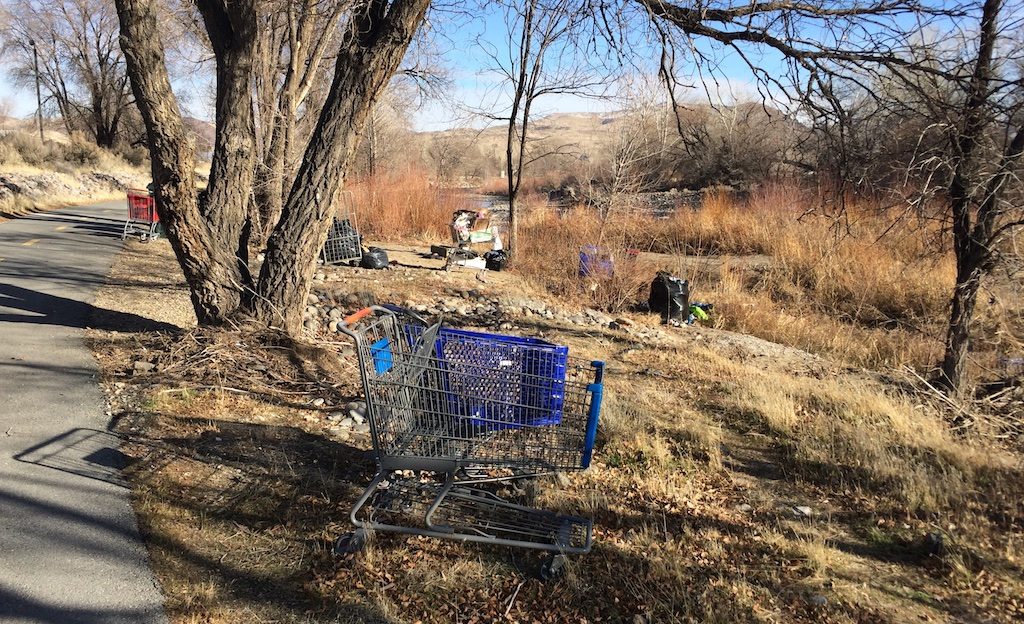 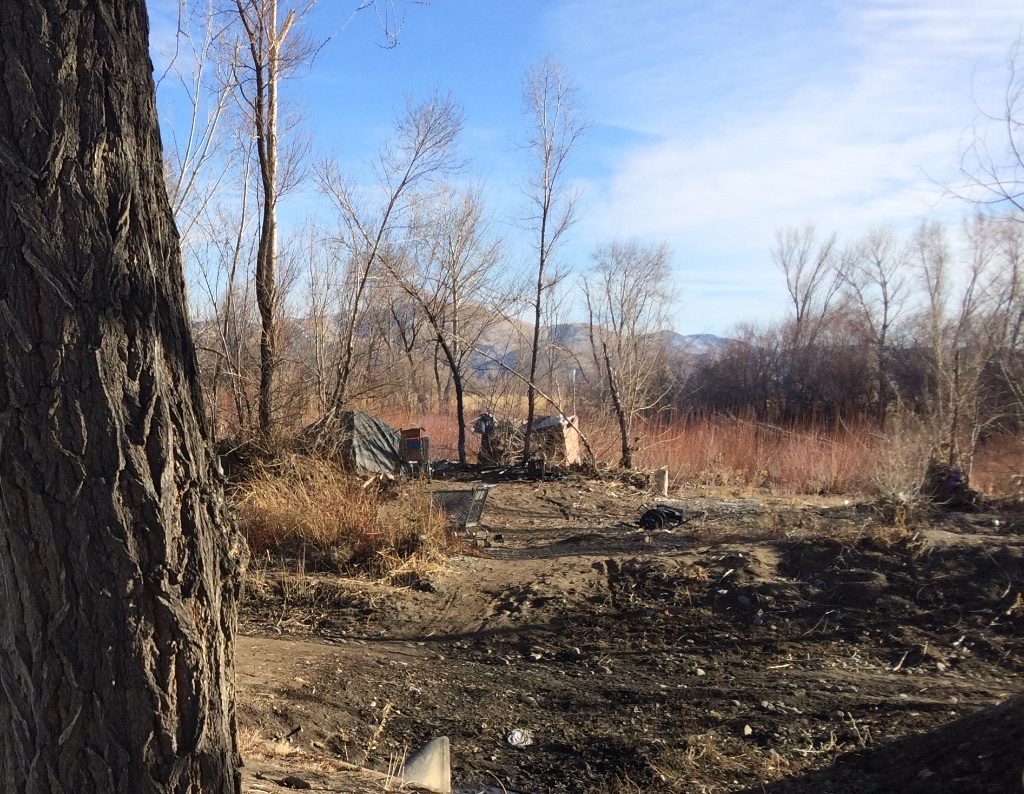 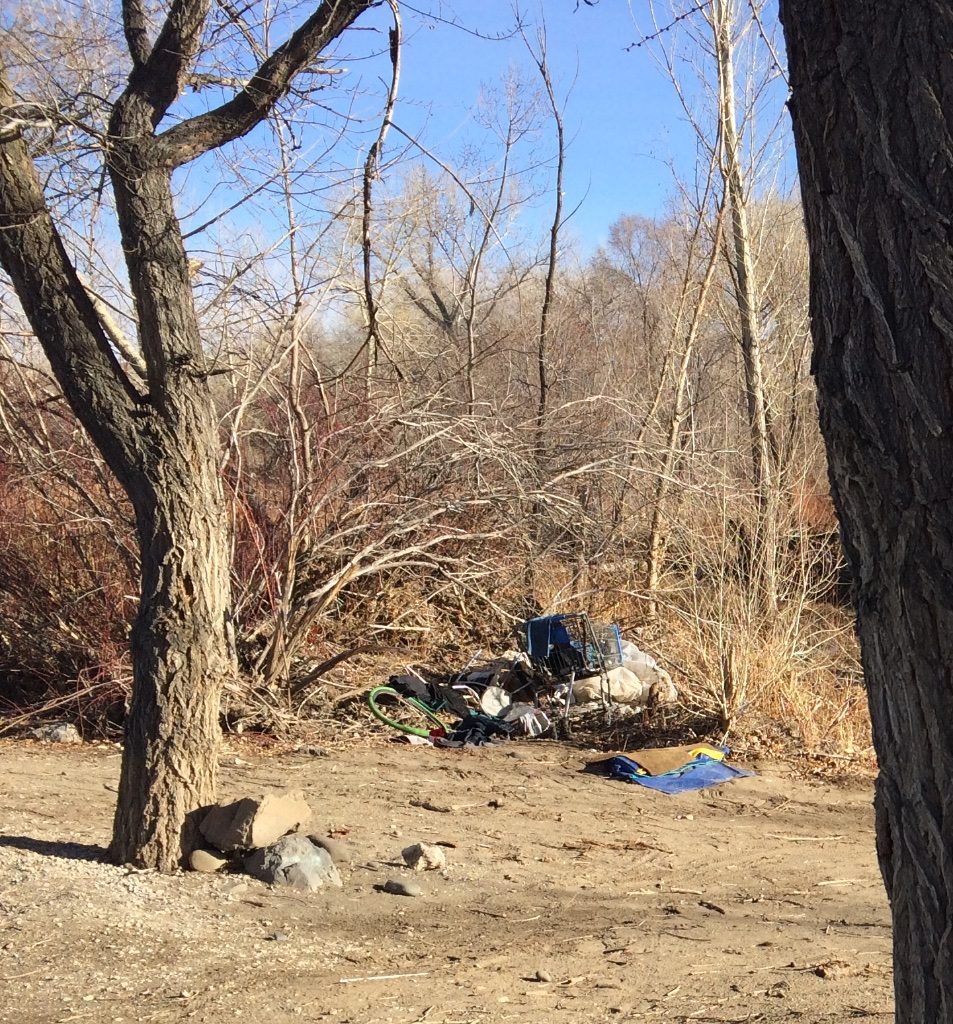 The Truckee River watersheds in the northern Sierra around Lake Tahoe and Carson Range are essentially snowless below 7,500 feet. Even at higher elevations snow is seriously lacking.

Temperatures in the west are much above the long-term average and storms have been weak. Some rain has fallen in the mountains, but overall precipitation is down along with a snowpack of 25% or less. The weather service calls for the first significant snow storm on Thursday, but some earlier forecasts of heavy precipitation events missed the mark for the Tahoe and Truckee River areas. 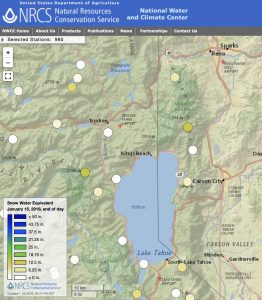 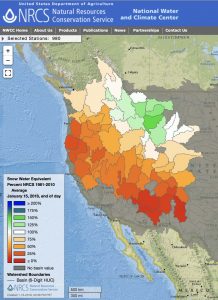 Far western and southwestern water basin snowpacks are very low according to the NRCS snow surveys and automated snow recording equipment. While typical winter season continues until April 1, previous droughts since 2000 seem to show that dry early winter conditions are less likely to reverse and produce more rain and snow as winter winds down.

Snow is lacking and overall precipitation is only slightly better over the long-term average. Reservoir storage is still high because of the exceptional precipitation from last year. Despite the dismal winter snow so far, it is still possible for winter to return us to average conditions. With each day, however, that possibility shrinks in likelihood. 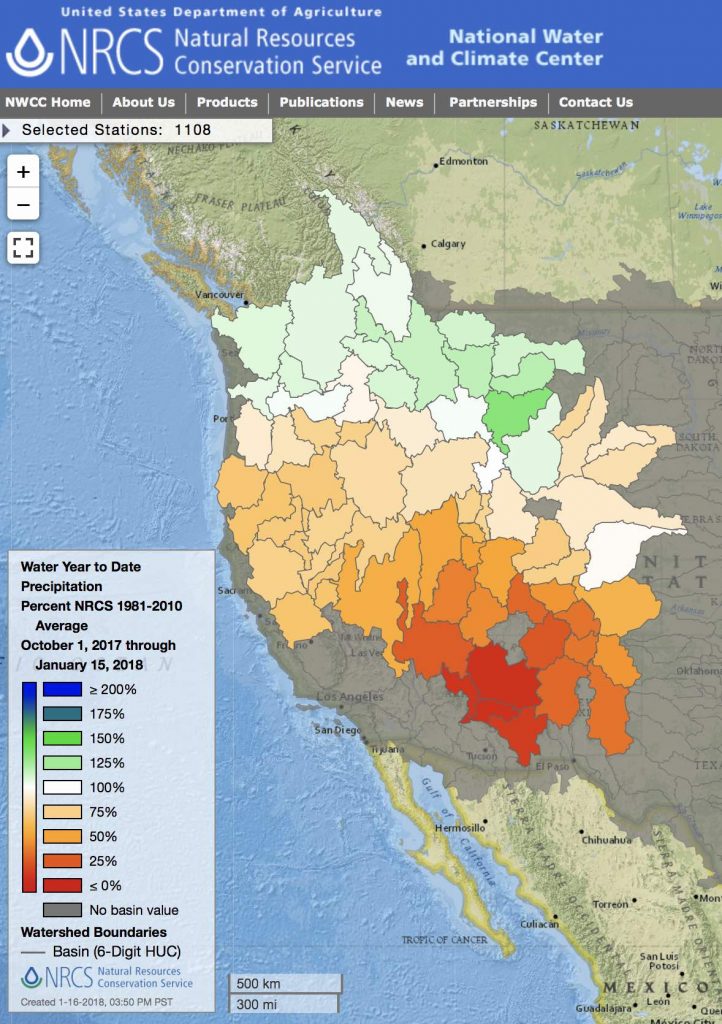 It didn’t snow much during the last 48 hours despite forecasts for some significant snowfall. Mt Rose Ski Resort reported only 3″ from the storm that could still produce some precipitation today and tonight while Squaw Valley reports 4″ at 8,200 ft. Forecasts call for another storm next week, but we’re still in need of significant storms to produce an average winter in the Tahoe-Truckee basin.

Join the Truckee Meadows Parks Foundation for their Martin Luther King Day Bioblitz. Info is at their website here or just keep reading:

Join the TMPF team for the MLK Day of Service, a national event to honor Martin Luther King Jr.! Stop by for the entire program, or for only twenty minutes—we’d love to see you there! Free and open to all ages.

We will be cataloging all living things in the park as part of an annual phenology project, to garner a better understanding of the plants, animals, and other wildlife and how their populations are changing. We will transect the park, and each volunteer will be responsible for recording all the plants, animals, and wildlife they see along their transect or section. TMPF will provide more detailed field guides, pictures, and tools such as aspirators, magnifying glasses, and forceps to allow citizens at all levels of comfortability to participate, collect, and identify the changing ecology of our local parks. This is a wonderful and non-traditional volunteer opportunity and will allow volunteers to participate in an ongoing project, as well as a way to get outside and enjoy one of our many beautiful county parks.

Please contact the TMPF office at (775) 410-1702 or info@tmparksfoundation.org with any questions, concerns, or comments.