The first ‘winter’ storm came in on Nevada’s Sesquicentennial Celebration on the evening of October 31 and was pretty much gone by the afternoon on November 1.  I was watching to see if there was a marked change in the elevation of Lake Tahoe indicating that the storm brought significant rain or snow to the Tahoe Basin itself and not just snow at the upper elevations.  The following graph illustrates why I’m disappointed with the storm’s impact on the drought. 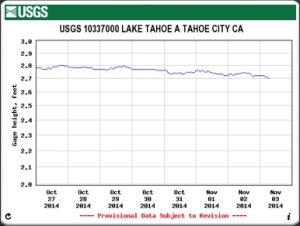 Lake Tahoe is huge covering 192 square miles (See Tahoe fast facts below).  And, its entire watershed is just 501 square miles.  What is significant about these numbers?  Lake Tahoe itself occupies 38% of its own watershed. And, precipitation either as rain or snow at lake level directly raises the level of the Lake.  Twelve inches of rain or snow, for example, over the course of a winter, falling on the surface of the lake will raise the lake’s level 12 inches even before the snow in the mountains melts and enters the lake through the lake’s many streams.

Unfortunately, the storm didn’t produce much rain or snow, apparently, at the surface of the Lake. (7″ of snow was reported at one ski area near Echo Summit on Highway 50.)  If you look closely at the above graphic, you’ll see there was a slight bump up in the elevation of the lake, but by today (Nov 3, 2014), the surface elevation has fallen lower than before the storm hit.  The lake is now 3.6 inches below its natural rim.  Until it rises above 6,223 feet in elevation no water can enter the Truckee River at the Tahoe Dam.

Still more bad news in the recent forecast maps for continued drought in the west which show California and Nevada (even Washington and Oregon) seeing more heat and less rain and snow.  Not a good combination, for sure. 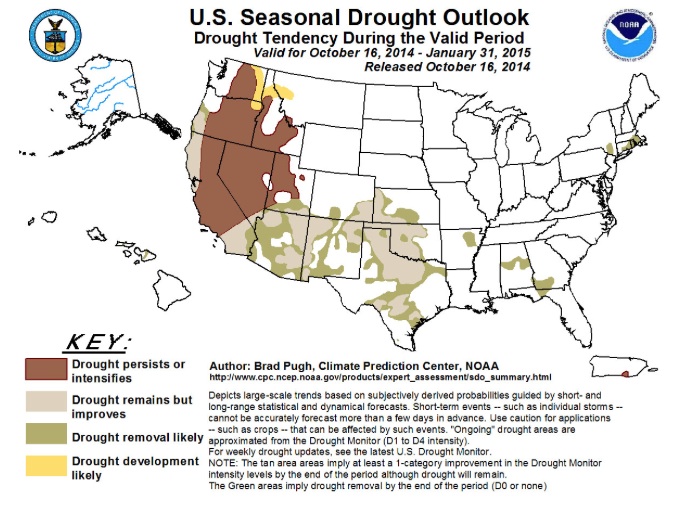