Soon the NRCS (US Natural Resource Conservation Service) will do the April 1 snow survey.  That survey – generally the last one for the 2015-16 season will undoubtedly be much improved over the last one for the 2014-2015 winter season. However, is it a drought busting winter? Not too likely at this point.  Will it be above or below average or just average?  Stay tuned for the report.

Meanwhile, a much appreciated, surprise “inside slider” snow storm dropped as much as 10 inches of snow in Reno and along the east side (predominately) of the Carson Range and Sierra. Without the rain shadow of the Sierra, Reno got just as much snow as much higher mountain locations. 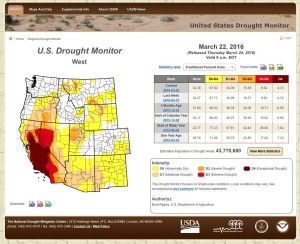 This winter season has been unusual in that the much predicted above normal precipitation for the southwestern US largely did not materialize (at least yet). Currently, the drought monitor still shows significant drought conditions for the southwestern portion of the country.

One average – or even above average – winter season doesn’t make up for the severe deficits built up in the Truckee River basin during the last 4 years and the deficit created in Truckee River flows over the last 16 years of mostly drought conditions. The southwest US drought started in 2000 and has continued with only 2 above average precipitation years. The final survey for the 2015-2016 winter season for the Truckee River watershed may come close to average or better, but the entire southwest US is unlikely to see an end of the long drought.

One good thing; the late snowstorm will likely delay the start of Truckee Meadows residents cranking up their sprinkler systems. TMWA (Truckee Meadows Water Authority, water provider for the region), however, seems poised to declare the drought over. 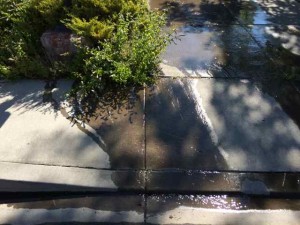 Water pours into the gutter from excessive watering in August 2014.

Keeping water conservation in place would be a far better approach and making sure the groundwater areas that TMWA pumps from recover fully before dropping conservation measures. It is far too early to pretend drought for the Truckee River has ended.

The Truckee River is flowing much more than last year at this time, but with Lake Tahoe still below its rim, it is unlikely that this will be a banner year for Truckee River flows. A very dry February threw cold water on hopes for a double or triple snowpack year. Could that change?  It will depend on whether it rains and snows a lot more into the spring.  So far, most of the storms in March have been much bigger on the west side of the Sierra than on the east, but have helped restore some of the lost Truckee River watershed’s snowpack after a dry February.

As of today, Lake Tahoe’s elevation stands at 6,222.72 and rising as snow melt kicks in. That’s a big gain from Dec. 9, 2015 when the Lake’s elevation was 6,221.37. Tahoe’s rise of 1.35 feet over the winter represents 54 billion gallons of water. That 54 billion gallons, however, merely fills a huge water deficit and isn’t water that represents flow to the Truckee River; and Tahoe needs another 11 billion gallons to repay the deficit so that water can once again reach the Truckee River at Tahoe City. 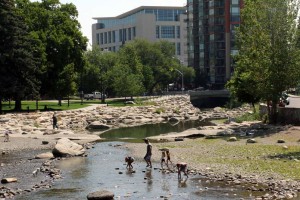 Pyramid Lake, however, has continued to fall in elevation dropping more than a foot since October 1, 2015 to the last measurement on March 1, 2016.  Continual Truckee River diversions to Lahontan Reservoir are a significant factor in the loss of water for Pyramid Lake, the natural outflow for the Truckee River.

According to USA Today, “[t]he U.S. saw its warmest winter on record – a whopping 4.6 degrees above average.”

Reuters reports, “The rate of carbon emissions is higher than at any time in fossil records stretching back 66 million years to the age of the dinosaurs, according to a study on Monday that sounds an alarm about risks to nature from man-made global warming.”

For the moment, however, we see a flowing Truckee River and will still hope for a good spring runoff, fish spawning from Pyramid Lake into the Truckee, and water for kayacking and swimming in the river during the summer. It might even keep snowing into April, right?