Lake Tahoe once again is seeing a bounce from a wet and warm weather system. As of the morning on Friday, October 28 Tahoe’s elevation has risen about 0.1 feet or just about 1.2 inches. If the rain continues, Tahoe will continue to rise as rain falls directly on the lake as well as additional inflow from streams. 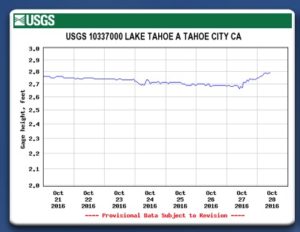 Tahoe is a big lake so a 1.2″ rise represents a significant amount of water.  Rain should continue on and off today in the mountains and Truckee Meadows and then showers and rain again on Sunday.  The National Weather Service reports that we could set a precipitation record for October in Reno given previous wet storms and this series of storms. Snow levels at this point are high with rain on most of the mountain passes. By Sunday, the National Weather Service says snow levels will lower to around the Lake Tahoe elevation.

Below are captures of webcams from Boreal Ridge Ski and Heavenly Valley Ski areas around 8:38 am on Friday 10/28.  They show a sodden landscape – but free of snow at this point. 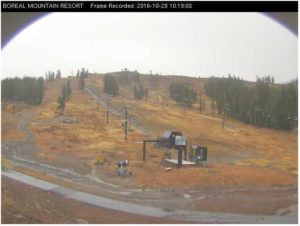 Boreal Ridge Ski webcam screen capture on morning of 10/28/16. Boreal is on the crest of the Sierra Nevada and is just west of the divide between the Truckee River and the South Yuba River. 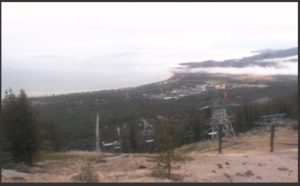 The recent rain in the northern Sierra and western Nevada was certainly welcome.

I just saw a Facebook post declaring that “11 billion gallons of water added to Lake Tahoe …”. Yes, Tahoe did rise about 3″, so its elevation today is about 6,222.75′ but still 3″ below its rim. So by the Facebook post’s reckoning, there remains an 11 billion gallon deficit. 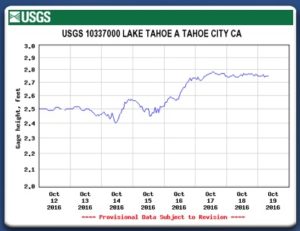 To be sure, the water year is just 3 weeks old and the 3 day rainstorm was a good start to the fall and winter season. Will we get a double or triple precipitation and snowpack year? We would need that and a lot more to make up for the 16 year drought the entire southwest has experienced.

While we can hope for a record-setting snowpack this winter, hope is not going to solve our continuing water crisis. We need to recognize the very real possibility that the average annual precipitation of the 20th century is less – perhaps far less – in the 21st century. The first sixteen years of this century have produced snowpack runoff resulting in only about 70% of the 20th century’s average river flows in the Truckee River. Expecting an end to the lower flows of the Truckee River is sticking our heads in the sand.

Not literally, I hope.

For a perspective on just how much less runoff we’ve gotten, look at a past truckeeriver.org article “Just 14 years ago …”  written in 2014. 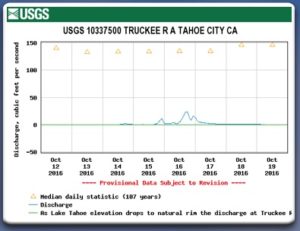 This Saturday, October 15 the rain intensified with the new storm. While the temperatures seem  unseasonably warm, rain is always welcome in the desert.  At 9:30 pm it is still raining and the temperature where I live in Reno is  50º F; not close to snowing, that’s for sure.

Rain, however, does result in rapid runoff from commercial and residential properties and parking lots and roads. Oil mobilized by rain in parking areas and roads runs off to adjacent streets, into the storm drains, and then into the Truckee River. Containing this toxic runoff requires a good storm drain plan that works to reduce and clean the runoff before it reaches the Truckee River. The community should focus more resources on cleaning pollution associated with rapid storm runoff. 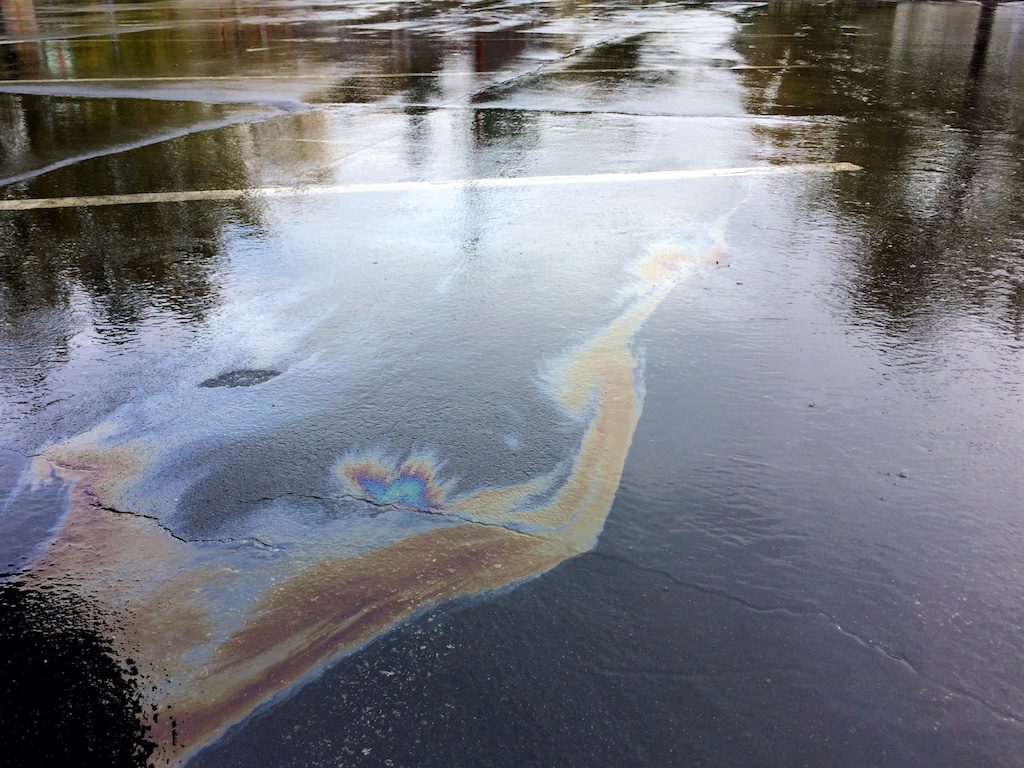 A rain in Reno results in oil being mobilized and moving from parking lots to storm drains and into the Truckee River.

Lake Tahoe’s water level fell to 6,222.5 feet on October 12 or 6 inches below the elevation where water can flow to the Truckee River. Lake Tahoe is the bellwether of the Truckee River. When Tahoe doesn’t have any water to provide to the river, you can bet that the other tributaries are suffering from dry conditions, too.  That is certainly the case in 2016 as it was in 2015 and 2014. 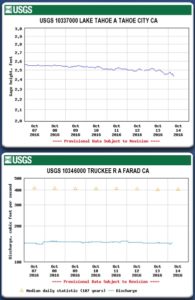 It is too early to tell whether this winter will provide snow and rain that breaks the drought, but the winter of 2015-16 was no drought breaker despite the improved river flow this past spring and early summer. Partly that was due to the extremely dry winters that preceded last winter’s average to slightly below average precipitation and snowpack.

Today and the following 3 days are bringing in some of the first winter weather for the fall. Warm conditions will return following the series of storms, however. Will these storms be a harbinger of a winter of snow and rain to come? We can only hope. 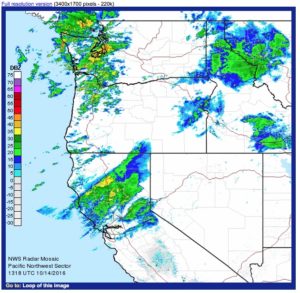 Storm approaching on morning of October 14, 2016

If you love Nevada’s wide open spaces and wild geography of valleys, playas, lakes, and mountains, you will find the annual geology field trip a winner.  This year you can travel from Reno to Pyramid Lake along the Truckee River with experts that can point out past lakes, lava flows, and other events that shaped the region we call home.  Check it out.