A bill, AB 193, that just had a Nevada Assembly Committee hearing last Tuesday, would mandate that the Truckee Meadows Water Authority (TMWA) add fluoride to our community’s high quality drinking water.  The bill should come again before the Assembly Natural Resources Committee; reports are that the committee members appeared favorable to the Legislation. The legislators appear willing to overrule the voters of Washoe County who rejected water fluoridation by a 58% to 42% vote in 2002.

The purported purpose of fluoridation is to reduce dental cavities in young people – especially in low-income households. Better dental health for everyone is a laudable goal, but is fluoridation of the entire water supply an effective means of improving dental health? 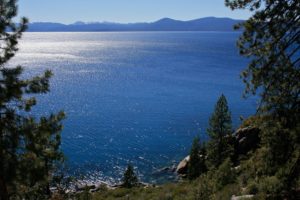 Lake Tahoe is famed for its pure water. Do we benefit from added fluoride to our clean water source?

Large-scale fluoridation of the water supply began in 1945 in Grand Rapids, Michigan. At the time, with less concern and understanding about dental hygiene by individuals, it was thought that fluoride added to the water supply would help prevent dental caries (cavities). However, data do not appear to support that fluoridating the water supply of cities is responsible for the improvement in overall dental health in the USA or any industrialized country. Proponents of fluoridation rely on the Center for Disease Control (CDC) Oral Health Division’s claim that it is “safe and effective”. Neither claim is without controversy. Critics point out that the studies in favor are often inadequately controlled for the other sources of fluoride. 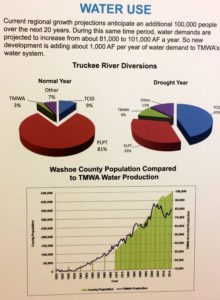 Water use in the TMWA service area (March 2017): Source TMWA (click to enlarge)

Currently, TMWA supplies about 26 billion gallons of water a year to its customers annually. Fluoride would be added to all of it. The bill would require fluoride levels to be 0.7 parts-per-million to 1.2 ppm.  You’d be showering, washing clothes and dishes, watering your lawn and garden and washing your clothes with fluoridated water despite the fact that it would provide no benefit at all. Health professionals recommend people drink 8 cups of water a day (half-a-gallon). How many actually drink that much – or any – tap water a day?  What about those who drink mostly soft drinks or other pre-packaged drinks or drink bottled water (which usually has less than 0.1 ppm) ††? How many people will receive the purported benefit from all this fluoridated water? How many who drink lots of tap water will be getting far more than recommended levels?

So how much fluoride would be needed each year? My calculation is that to treat the current water supply by TMWA would require the introduction of 151,788 pounds of fluoride each year into the water supply.† The cost of fluoridating the Truckee Meadows water supply would probably require a increase in TMWA customer’s water bills.

Unlike most areas of the world, the Truckee River – which supplies all the water for the Truckee Meadows – does not flow to the ocean. Rather Truckee River water ends up in primarily Pyramid Lake or (because Truckee River is diverted from the river to farm lands at Fallon) the wildlife refuges and wildlife management areas in Lahontan Valley. That means that fluoride added to our water supply and returned through runoff, groundwater, or the sewer treatment plant eventually ends up in either Pyramid Lake or wildlife refuges. (Some, of course, also ends up in the crops grown on farms receiving water). With each passing year evaporation concentrates the fluoride in Pyramid Lake, for example. The total amount of fluoride in Pyramid Lake would keep growing year upon year.

A summary of scientific investigations that raise concerns about the safety and effectiveness of fluoridation of the water supply was published in Newsweek Magazine June 2015. In that article, numerous scientific studies are cited documenting the adverse health risks (disrupting the endocrine system, impairing brain function, potentially increasing ADHD and damaging thyroid function, and causing fluorousis in many) as well as its unproven effectiveness. People already get fluoride from multiple sources: fluoride occurs in cow and soy milk, infant formula, tea, coffee, grape and other juices, carbonated beverages, wine and beer. Fluoride is in toothpaste and other products related to dental care. Most people use toothpaste with fluoride (commonly sodium fluoride: NaF at 1,500 parts-per-million or ppm). Fluoride in toothpaste and increased awareness of brushing and flossing have steadily reduced the incidence of dental cavities. But Fluoride toothpaste isn’t ingested like fluoridated water.

Some studies show that drinking fluoridated water does not reduce dental cavities in adults. It also may not effective in reducing cavities in children’s “baby teeth”. A 2001 study in Canada where fluoridation was stopped in one community found that cavity occurence went down “slightly amongst schoolchildren” and remained stable for the community at large. This implies that the risk of tooth decay would not increase if all fluoridation were stopped.

Although the CDC reports 73% of the US population receiving fluoridated drinking water, nearly 60 percent of US teenagers have cavities and a quarter of those also have untreated tooth decay. Most of these kids are drinking fluoridated water. What is the major driver of this statistic?

Fluoridation of the water supply causes dental fluorosis – a condition which creates mottling on the tooth surface – in 40% of teenagers according to studies reported by the New York Times in 2015 . The number of teenagers affected doubled in 20 years. Fluorosis tends to affect African- and Mexican-Americans at a much higher rate than the overall population according to studies.

In studies that looked at countries which fluoridate water verses those that do not, the data show a steady improvement in overall dental health in all similarly. Fluoridation of the water supply does not appear to provide an additional benefit to the population. 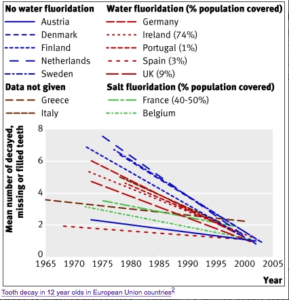 Regardless of whether the water supply is fluoridated or not, dental caries have dropped similarly in all countries in the study. (click to expand)

These studies support the conclusion that brushing with a fluoridated toothpaste appear to be the real drivers which improve overall dental health. Shouldn’t our efforts be directed to increasing this trend?

It is inappropriate to provide a treatment to all through the water supply in order to achieve a dubious benefit. It seems clear that the real benefit for dental health is through brushing and flossing. Fluoride causes other problems which have been documented by scientific studies and there are other sources of fluoride that people are subject to that are difficult to know or control for.

Bottom line: The legislature should not force the fluoridation of water. Contact your legislators and tell them to respect the Truckee Meadows citizens vote and reject water fluoridation for Washoe County.

1 thought on “Fluoridated water for Truckee Meadows not solution”