The LA Times reports conditions are increasingly favorable for a wetter winter in California and Nevada.  The Time’s report is based on the NOAA Climate Prediction Center’s map for the 3 month outlook from January through March 2016.  The most likely increase in precipitation is 60% or greater in southern California from Los Angeles and across southern Arizona.  Further north, however, the probabilities drop off to around 30% in northern California and Nevada.  Reno appears right at the 40% contour line. Temperatures are also forecast to be above average.  Today’s Reno Gazette Journal also reported on the El Niño phenomena that a wet winter is coupled with a forecast for above normal temperatures that will potentially impact snowpack. This El Niño is being compared to the winter of 1997-98 due to the similarity of the strength of the warming in the central Pacific Ocean. 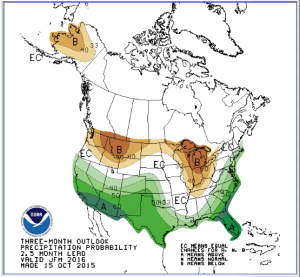 The drought outlook for the next three months, October through December 2015, remains droughty with higher than average temperatures.