The Truckee Meadows Water Authority seeks a 10% reduction in water use from all its water customers sighting exceptional drought conditions and sooner reliance on its private drought reservoir storage and local wells. As reported on Fox Channel 11 the drought is “worse then (sic) expected”, according to an unnamed TMWA spokesman, “but, the good news is there will be enough water to get through this year.” 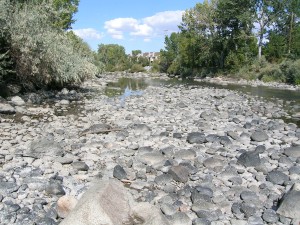 Demands on the Truckee River exceed the rivers ability to keep up. The river is particularly stressed during droughts which could become more common.

So defines our water supply strategy, “pray for snow”.

While the ten percent reduction is called for across the board of all TMWA customers, it isn’t clear how TMWA will report or monitor how customers respond. Further, the call for voluntary reduction fails to recognize that some are very large consumers of water – especially for outdoor watering – while many customers use significantly less water.  The call for a 10% water use reduction by all customers in August, September and October of 2014 actually resulted in a 7.5% reduction or about 1,100 acre-feet according to TMWA. It remains to be seen whether people will respond for an entire spring, summer and fall season with reduced water use. A couple of days of thunderstorms in August 2014 bringing significant rain to some areas in and around the Truckee Meadows could have helped TMWA achieve the reduction.

TMWA’s call for a cutback of 10% in water use doesn’t address the waste of water that is common throughout the valley.  Automatic sprinklers are notorious for wasting water in my neighborhood with obviously broken pipes, poor installations, and way too long cycle times that lead to serious overland flow into the street.  Reports of these problems to TMWA has yet to yield any fixes since early last summer.  Will TMWA begin to address water waste this year?

As we move into uncharted territory this summer and fall with a 7% of normal snowpack at Lake Tahoe, the public discussion of growth and water use seem to be far away. 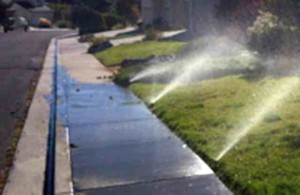 An RGJ editorial “A low-snow future? We need to Talk: Our View“, raises questions about our current drought and its implications for our water future: “This could be just another wild swing in the Sierra Nevada’s historically fluctuating weather.  Or it could be a sign of things to come?”  Indeed, I’ve posed a similar question in one of my blogs:. The RGJ points out several facts which point in a very troubling direction for our region’s water supply:

What the RGJ failed to mention is also significant.  For example, to most of us who pay attention, the drought has been with us for 15 years with 2 wetter years interspersed.  Or put another way, western Nevada has had 13% above average or wet years and 87% below average or dry years in the last decade and a half.

Could a shifting climate, warmer winters and summers, and prolonged dry periods change both the way we live as well as dry-up our rivers and lakes? It is going to take serious changes to our water use if the last 15 years are the new “normal”.

The news from the last month gives us a taste (an unpleasant one at that!) of what may become our water future.