California news outlets report that the April 1, 2016 snow surveys show that the snowpack is running slightly above to slightly below average in the northern and central Sierra Nevada and decreasing to around 75% as you move southward along the range. Southern California and southern Nevada and Arizona have below average snowpacks reported by the California Resource Agency and the US National Resource Conservation Service for April 1, 2016.

Scientists with the Desert Research Institute say this result is opposite of what would be expected for an El Niño year where more precipitation should occur in the southwestern US – southern Nevada, Arizona, and southern California – and drier conditions to the north – Washington and Oregon. (See  winter forecast article from last fall.)  Winter 2015-16 saw precipitation trending higher in the Pacific northwest including northwest California instead. Why? Scientists do not currently have an explanation for the switch. Most snowpacks, however, are just at or below average in many north western locations. 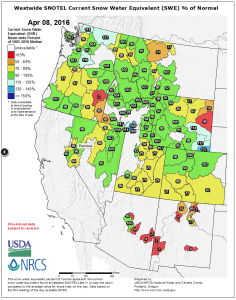 Great climate weather maps can be found at gbdash.dri.edu.

The trend did produce an average water year with a less than stellar snowpack on April 1 in the Truckee River watershed in both the Sierra Nevada and Carson Range west of Reno and around Lake Tahoe. As I write this, Lake Tahoe is still about 1.5 inches below its rim, but rising as the snowpack melts under very warm spring conditions. Flow for the Truckee River this year is likely to be below the long-term average, though, because the entire Truckee River watershed has been in deficit over the last 16 years. Currently, the Truckee River is flowing at around 800-900 cubic feet per second (CFS). However, 300 CFS is diverted away from Pyramid Lake reducing flow to Pyramid to 500-600 CFS. Pyramid’s large water deficit over the past 16 years is likely to continue in 2016.

At the April 5, 2016 Climate Forum, scientists talked about the anomalous nature of precipitation for this year’s El Niño. However, El Niño did produce warmer conditions as would be expected. This winter was overall very warm and the departure from the long-term average temperatures continues up which is in keeping with global temperature rises. 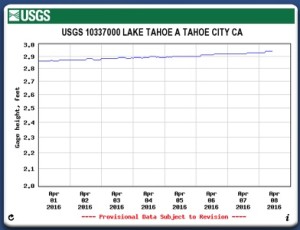 In a brief presentation on the region’s climate looking to the future, Dr. Kelly Redmond from the Desert Research Institute, explained that as of now humans have added 25% more CO2 to the atmosphere and that the CO2 will remain in the atmosphere for a long time – one or two millennia. It is simple physics that CO2 has changed the heat balance of the atmosphere and that more heat is being retained now and will continue until a new, warmer overall equilibrium for the earth’s atmosphere is reached.  Other scientists said warmer conditions also lead to increased evaporation and evapotranspiration by plants. Even if precipitation remains the same, warmer temperatures mean less water will be available for rivers and streams and groundwater recharge as a result.

At the Climate Forum Dr. Benjamin Hatchett from UNR discussed long-term drought that occurred in the past.  Droughts lasting 240 and 140 years occurred between 832 – 1299. Are we prepared for such events should they occur again?  Clearly the late 19th and 20th centuries produced more average precipitation for the west than the beginning of the 21st century has so far. Could a “mega-drought” be in our near-term future? Climate models are not showing a huge swing downward in precipitation, but warmer temperatures will exacerbate droughts. How can we as a society do a better job of using water in both good and poor water years?  Can we adapt to warmer conditions and still maintain the environment? Truckee River flows? Pyramid Lake? Area streams and springs? Forests?

There seems little doubt that warmer conditions alone will require a much more thoughtful approach to water use if we expect future Nevadans to enjoy a healthy Truckee River and sustained Pyramid Lake and Lake Tahoe. 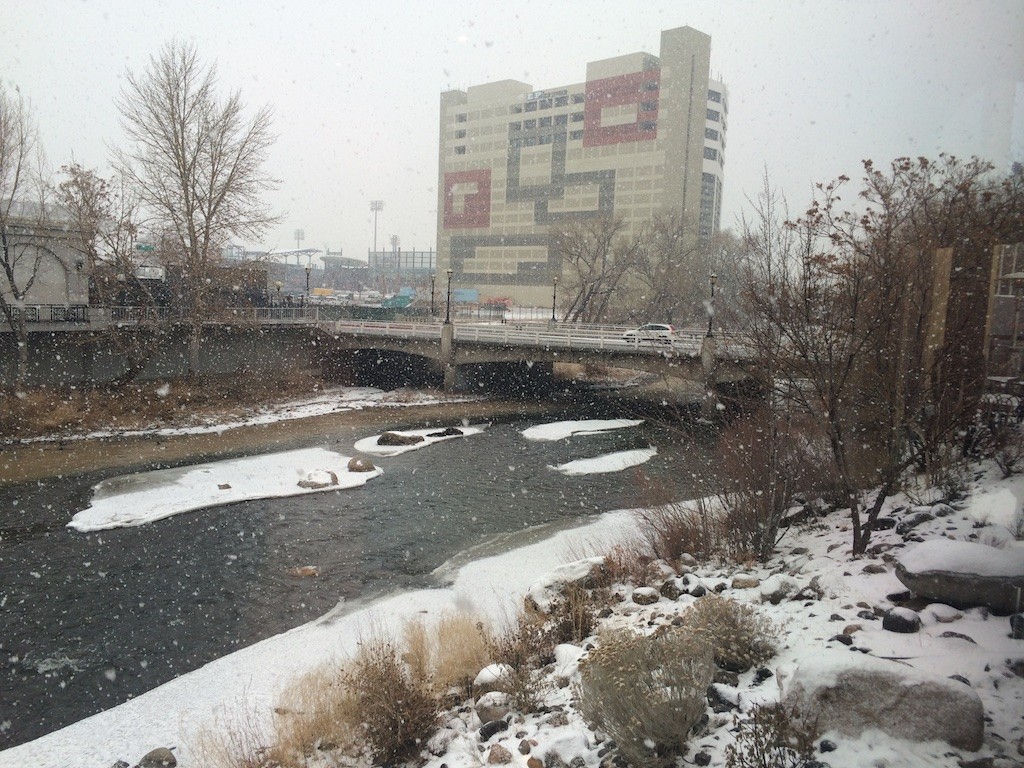 Winter snow with a barely flowing Truckee River through downtown Reno at Lake Street Bridge during the TROA Celebration.