The Truckee River in the high cold Great Basin Desert seems an unlikely place for rare birds to appear. But in the last five years, the River has hosted four birds that made the regional Rare Bird Alert lists. Most recently, Greg Scyphers found two quite rare birds in the riparian forests in the Truckee Canyon.

Last fall, a female Painted Bunting was discovered hiding next to a little oxbow pond in one of the lower river restoration areas created by The Nature Conservancy.  A beautiful multi-colored sight in the lower mid-western states, the bird is rated as a “casual” fall visitor to the West. 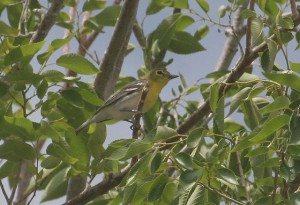 Earlier last spring, a Yellow-throated Vireo which is common in its far eastern US range showed up in a patch of riparian forest. Catching a glimpse of this bright yellow vireo flying between willows and cottonwoods was a challenge, but all viewers enjoyed its distinctive song.

A Long-tailed Duck (AKA Oldsquaw) graced the Truckee River in downtown Reno during the winter of 2010/11, diving and swimming underwater for its meals.  This duck usually winters off the west coast and breeds by ponds in the far-northern tundra.

An even rarer Eastern warbler showed up in the fall of 2009 in another restoration area along the lower Truckee River – a Blue-winged Warbler. This brightly colored warbler lives east of the great plains in brushy meadows and is considered a “vagrant” to the West.

Historically, rare Black and White, Tennessee, Black-throated Blue, and Blackpoll Warblers, American Redstarts, a Harlequin Duck, and a Pacific Loon have been found by birders in the river or in the river trees.

The Truckee River continues to attract flocks of birders who enjoy both the rare and the resident birds.  Do you know of any other rare birds on the Truckee River?  I look forward to hearing about other avian gems along our river!